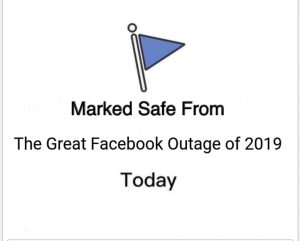 If you didn’t already know it – last week proved without a shadow of doubt how far we have come and how much things have changed in the last 20 years.  And not necessarily in a good way. Facebook and Instagram (and then WhatsApp) crashed – completely – and for about 12 hours.

Well, you would think the world had ended.  The amount of Tweets (bet Twitter were rubbing their hands together in glee), that expressed dismay, disgust or fury over the outage is really quite worrying.

30 years ago if the BBC had gone down for the day people might have sighed about missing a favourite programme, but most people would have shrugged their shoulders and gotten on with it.  Nowadays – Facebook goes down and the world is in uproar.  How do I get hold of anybody? (Huh – try RINGING THEM, like ON THE PHONE).

This is one time when die hard Facebookers and Instagrammers, finally saw the point of Twitter.

Even Facebook themselves took to communicating with the world through Twitter, assuring us they were aware of the problems, working on the problems and it was not a DDoS attack (Distributed Denial-of-Service).  A DDoS attack is where too much traffic is sent to a specific place – causing said systems to crash.

In the lead up to yesterday there were clear signs something was not right at Facebook.  All week we have struggled and failed to set new adverts live, to reply to messages on Pages, to upload images (either getting none or double!).  Even today – Facebook scheduling isn’t working – so we are posting in real time for clients. A bit more time consuming but do-able, short term.

Which brings me to a bigger issue.  Well 2 actually.

Firstly, if you have a favourite channel – you are vulnerable.

As with everything in life – if you have all your eggs in one basket you are vulnerable.  If your biggest client is more than 25% of your business – you are vulnerable.  So if they leave you or go bust, you’re probably not far behind.  If you have only one clean shirt for work today – you will probably squirt ketchup on it or spill coffee on it right before that important meeting.

It’s the same with social media.  If  you only have one platform that you rely on and they change things, you are vulnerable. If you don’t believe this then look at the story of Little Things.

Little Things was a good news channel on Facebook and since launching in 2014 – by the end of 2017 – it had attracted 12 million followers and was on the point of being sold to another media agency.  Then came Facebooks Jan 2018 algorithm change.  Little Things lost 75% of its organic traffic and massively hit its income.  The buyer got spooked and pulled out and the business had to shut with the loss of 100 jobs.

The same has happened numerous times with Google Algorithm changes.

Ideally – don’t rely on one channel on social media (or 2 if they are both owned by Facebook!).  For most businesses 3 or 4 channels is ideal.  You don’t want to spread yourself too thinly, equally you don’t want all your eggs in one basket.  Which brings me to my second point.

As Far As Possible Drive Traffic OFF Social Media

You must build a relationship with your audience in the real world.  Any platform owned by someone else makes you vulnerable.  And I include CRM’s, websites and all social media in this (including a You tube channel).

The fact is at any time they can change the rules, and knock you out.  They can ban you.  I was reading a blog from a marketer who was getting great results with Facebook Messenger advertising.  Until one of his team ran a poorly targeted ad (targeting non English-speaking countries with English speaking ads – and also not factoring in the time of day relative to the country targeted).

Unsurprisingly 8% of people blocked him.  That is a dangerously high % and therefore he can now no longer run messenger ads.  You’re always gonna get some haters.  1-2% of people blocking you is normal.  At 3% you need to watch out and change something.  At 6% or more you are highly likely to be summarily blocked.

It’s all about keeping an eye on your analytics.

You are not in charge!

But the point is YOU ARE NOT IN CHARGE.  On any social media channel – you have to play by their rules, and sometimes, through no fault of your own (i.e. they change the rules) you get caught out.  So, my point is to start conversations which can continue OFF line.  As much as possible get people into your OWN systems.  And if you have a CRM or email marketing system  – don’t think you are not vulnerable.  You can get blocked from Mailchimp as well as Facebook!

So back up your data regularly.  Get your contacts out of the Matrix and onto your own – preferably multiple – back up.  Your own hard drive/s, excel spreadsheet saved on your laptop and maybe printed off too (depending on the number of contacts).

In short – Spread The Risk, and Own Your Data.

I’d love to know what you are doing about protecting your tribe – wherever they currently ‘live’. (Espeically now Facebook and Instagram crashed)

Or use the button below to share this article

Trolls And What To Do About Them