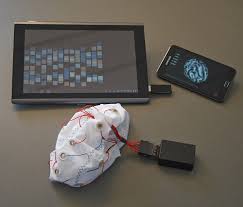 It seems that every couple of months something will pop up in the world of technology that makes people gasp and say “Wow back in my day all we had was a fax machine if you were lucky!” But we’re not in “them days” anymore and the rate that technology is advancing is extraordinary. Even when it comes to smart phones and devices, there seems to be something new popping up every month (or even weekly).

And this week I present to you: smartphones that can turn into 3-D scanners. Yes that’s right, a 3-D scanner.

Gabriel Taubin, associate professor of engineering and computer science at Brown University,  has said “The 3-D scanners on the market today are either very expensive or are unable to do high-resolution image capture, so they can’t be used for applications where details are important.”

OK, stay with me here for a second all of you technophobes but this next bit can sound quite complicated (but interesting) but if you really want to know how it works:

Most high-quality 3-D scanners capture images using a technique known as structured light. A projector casts a series of light patterns on an object, while a camera captures images of the object. The ways in which those patterns deform over and around an object can be used to render a 3-D image. But for the technique to work, the pattern projector and the camera have to be precisely synchronized, which requires specialized and expensive hardware.

But the algorithm Taubin and his students have developed enables the structured light technique to be used  without synchronization between projector and camera, which means an off-the-shelf camera can be used with an untethered structured light flash. The camera just needs to have the ability to capture uncompressed images in burst mode (several successive frames per second), which many DSLR cameras and smartphones can do.

If not, that’s Okay. You let the tech boffins get on with it. All you have to know is that yes this can actually turn your smart phone into a real life 3D printer and all you have to worry about is the price, which should cost around £99.

It’s still in its early stages yet and we can’t tell how successful it will be or how well it will work but in my opinion it could become a very handy tool to use.

If you’re a bit of a technology geek then here’s a diagram to help you understand the science behind it.   Interesting stuff, eh?